Travel back in time to the Ancient Kingdom of the Shilla Dynasty (BC 57 – AD 935) in eastern South Korea. Referred to as the Millennial City, Gyeongju was the capital of the dynasty that unified the Korean peninsula for the first time. Gyeongju and the surrounding areas of Ulsan, Pohang, Youngduk, and Andong are home to a wealth of ancient history, forgotten temples, and hidden pagodas. You will walk the streets and paths of royalty while sampling food fit for kings. This tour gives you the unique opportunity to try your hand at making your own pottery, eating with monks, and learning how to make a few of the amazing dishes you will sample along the way.”

Stroll the white sandy Haeundae Beach named by a Silla scholar and try traditional games at the Folk Square or visit the spa to relieve any jet-lag. Night tour of Busan along Korea’s 2nd longest suspension bridge built between two beaches seeing the modern colours of Korea’s southern port city.

Morning madness at Jalgalchi market, Korea’s largest fish market, offers a chance to sample raw delicacies prepared by the “Jalgalchi Ajumma”. Drive the coastal route to Gyeongju stopping at a beach-side temple adorned with lanterns. Feast like a King on Hobakjun & Kalguksu at a really cool king’s feast restaurant that used to be a “place where men were waited on by women” near Gaelim Forest Royal Tombs and Ice House.

Hidden in the mountains, saunter through UNESCO World Heritage cultural treasures from Royal Tombs and Seokguram, BulguksaTemples from the Silla Dynasty (BC 57 – AD 935). Follow the stone stairs that link the earthly world below to the world of Buddha above. Taste amazing potbingsu at the Herb garden over the hill from Soekuram. Walk around the amazing traditional ceramic artisan Minseok Village. Try your pottery skills on the wheel as the King’s potters did and make Sompyong traditional rice cake in a large dugout stone with a wooden mallet.

Step back in time in traditional Yangdong Folk Village [UNESCO World Heritage] where the local elders live as their ancestors did and sample unique regional tastes and stay in authentic Korean Hanok home-stay on the beach, sample kimchi and prepare healthy local cuisine using earthen ware. Short hike to Bogyeongsa temple and waterfalls. Relax the muscles and cook your egg at a wooden chimchilbang and sauna in Gyeoungju. Experience mindfulness at a Buddhist Korean temple stay while enjoying cooking a vegetarian temple meal with a happy monk.

Theatre night! Cookin’ Nanta nonverbal comedy performance has thrilled audiences since its first debut and best performance winner at the Edinburg Fringe Festival in Scotland. Without the sense of sight, the senses of touch, taste, hearing and smell are intensified, arising a new perception of reality arises – a unique opportunity to experience dining in the dark! Spend a night gazing at the half-moon 1.4km Gwangalli Bridge joining white sandy beaches in Busan 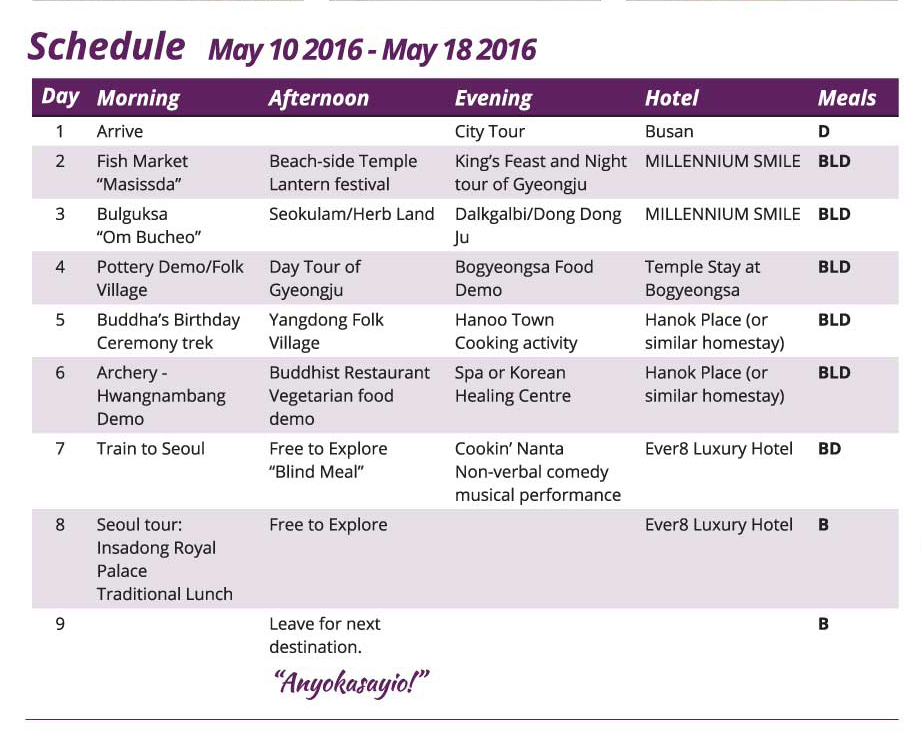